An interesting UFO was spotted over the Popocatepeti Volcano in Mexico near Mexico city. Until recently, the volcano was one of three tall peaks in Mexico to contain glaciers. The volcano has been a UFO hotspot for years with hundreds of sightings, but this one in particular dropped jaws around the world.

During January and February of 2012, scientists noticed that Popocatepetl’s action was actually increasing. On January 25 the activity transformed into an ash explosion on the mountain. As you can expect from a volcano erupting it shot ashes into the atmosphere leading to unexplainable situations often identified as UFOs.

But the particular incident we are describing was different because it didn’t shoot out of the volcano, but into it.

The object as seen in the news report was estimated to be one kilometer long and 200 meters wide. That equals 0.6 mile long and 0.12 miles wide.

Could it be a natural cause like a meteorite?
With the volcano being active, it is impossible to trace the object back.

An enormous mystery remains for the people of Mexico City. As the volcano stays active, perhaps more sightings will occur in the coming time. 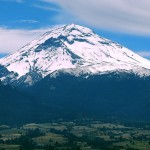